The huge Guan Gong statue built for 172.9 million yuan has been demolished.

On September 2nd, the giant Guan Gong statue, which is located in Guan Gongyi, Jingzhou City, Hubei Province, was officially launched. Judging from the live video, the head of Guan Gong has disappeared, and the crane next to the crane is working methodically.

Guan Gong’s head has been demolished 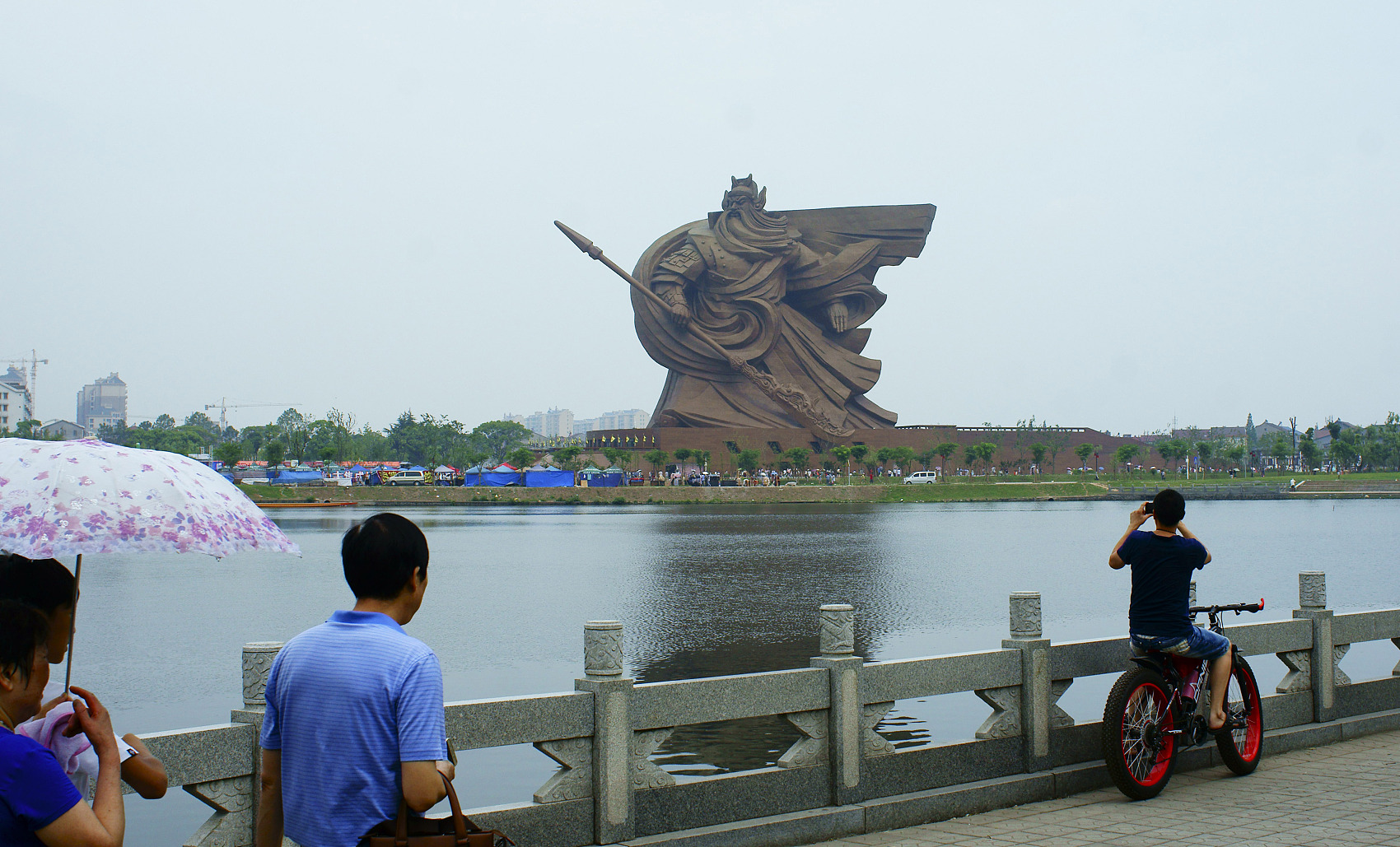 The online approval supervision platform for investment projects in Hubei Province shows that the “Guan Gong Statue Moving Project” approved by the Jingzhou District Development and Reform Bureau on December 17, 2020 has been reviewed and approved, and the total investment of the project is 155 million yuan.

The investor of the statue, the relevant person in Hubei Jingzhou Tourism Investment and Development Group told the reporter of the Times: “The Guan Gong statue is indeed under construction, and it is not convenient to interview.” The reporter then called the Jingzhou Propaganda Department. Consultation and hosting the main body of Jinglou Group will not master the specific situation for the time being. “ 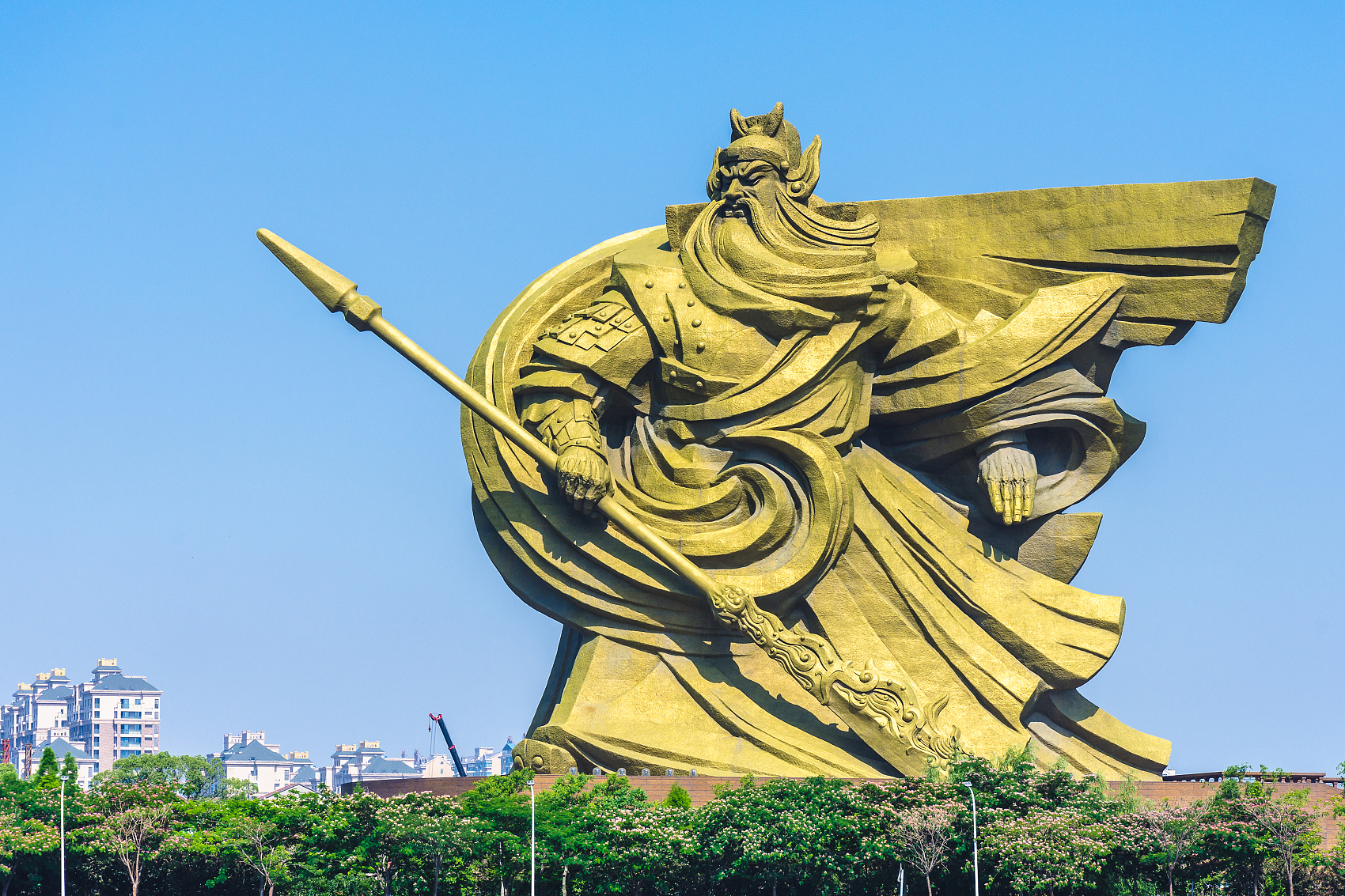 Have to dismantle it?

The dismantled Jingzhou Guangong bronze statue is 48 meters high, together with a base of 58 meters high and weighing more than 1,200 tons; the large knife is 70 meters long and weighs 136 tons. The dismantling statue of Guan Gong will migrate to the point general at 4 kilometers northwest of Jingzhou City.

As early as June 24, 2019, the Jingzhou Natural Resources and Planning Bureau wrote a letter to the Jingzhou Urban Management Committee: “The statue on the statue of the Guan Gong statue built on the southeast side of the ancient city of Jingzhou is unpopular. Investigation. “

In August of the same year, the Jingzhou Urban Management Committee issued the “Letter about the illegal construction of the statue of the Guan Gong Saint Elephant Base Statue” to the Jingli Group, ordered Jingli Group to rectify before September 30, 2019.

The former Guan Gong statue “opened the veil” under the attention

In July last year, there were media reports that the Guan Gong statue base was falling, and there was a gap between the Guan Gong Cultural Exhibition Center under the statue and the widest at the widest gap. , Two -degree bending with the horizontal plane. 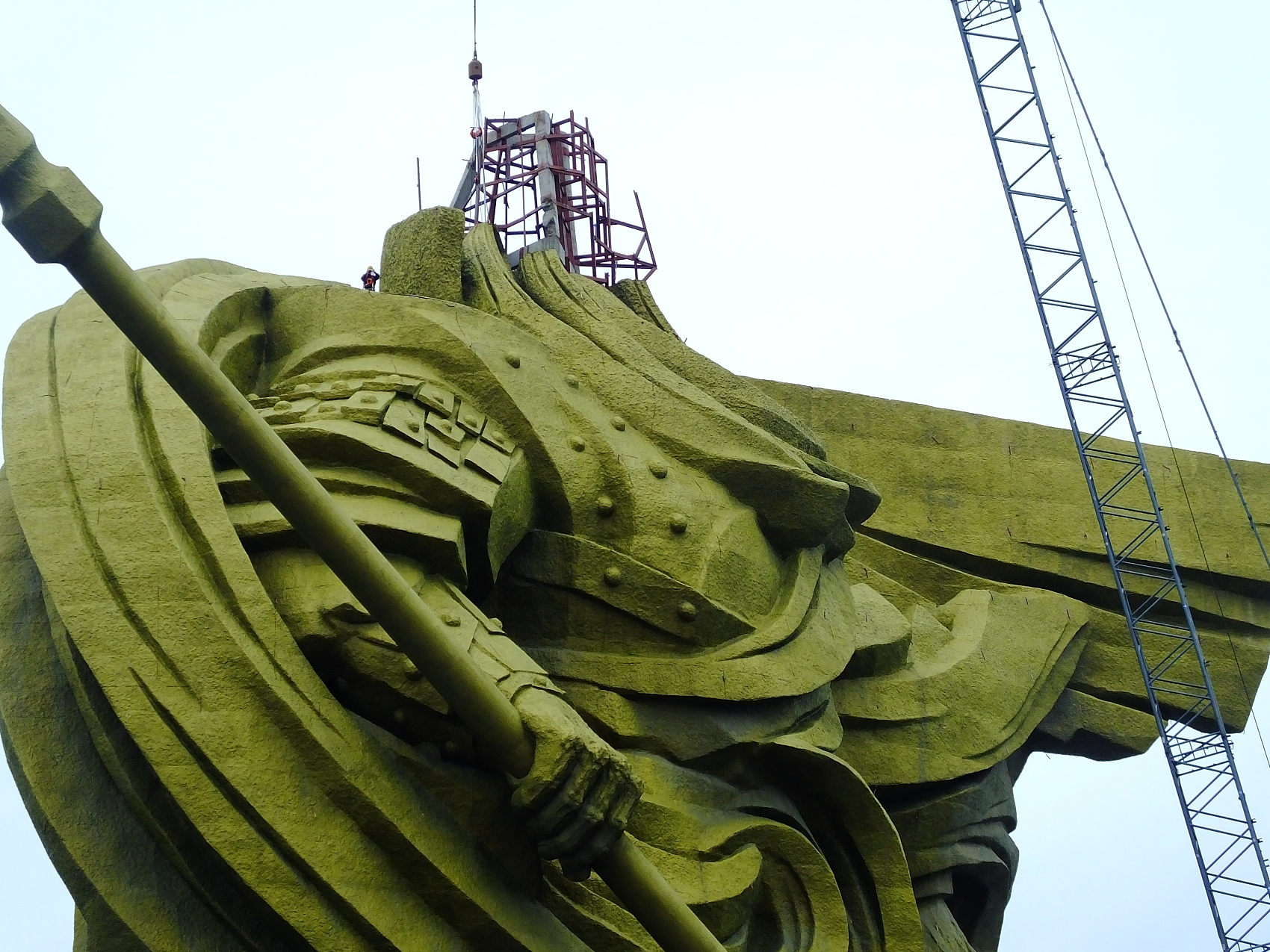 At that time, Wang Wei, chief engineer of Jingli Group, revealed that after the Guangong base was settlement, Jingli Group hired third -party institutions to arrange observation point monitoring around the image, and the annual monitoring fee was about 300,000 yuan.

Wang Wei explained that there is no problem with the structure of the statue of Guan Gong. Settling refers to the backfilling soil below the statue base. The above cracks and floor depression are caused by backfilling soil. “Settling is normal, and any building may settle down after the completion of the building. From the existing observation, various technical indicators are within a reasonable range. Around centimeters. “

However, Wang Wei acknowledged that the statue of Guan Gong did not be permitted by the planning department. According to its introduction, when designing engineering drawings, the statue below the base of the statue has been identified clearly. The statue above the base is artwork, which is difficult to quantify and identify various parameters, so only a schematic diagram. Based on this, the part of the base has not been planned.

In an interview with Times Weekly reporters, an engineer engaged in the construction of a large park said: “If there is a settlement, there must be problems in terms of engineering quality.”

The engineer said that under normal circumstances, the overall building dropped by 1 cm may be caused by two situations: one is a simple earth landlord, which is rare in this situation. There will still be dangerous situations such as architecture tilt; the second is that the foundation of the earth and the ground piles falls together. In this case, there will be huge hidden safety hazards, and the building may occur, crack, and collapse. For such risks that may exist, the engineer said: “I haven’t seen it on the spot, I dare not say this is the case, but if it is, it is very dangerous.”

Jingzhou native: I have never heard of it, I haven’t been to 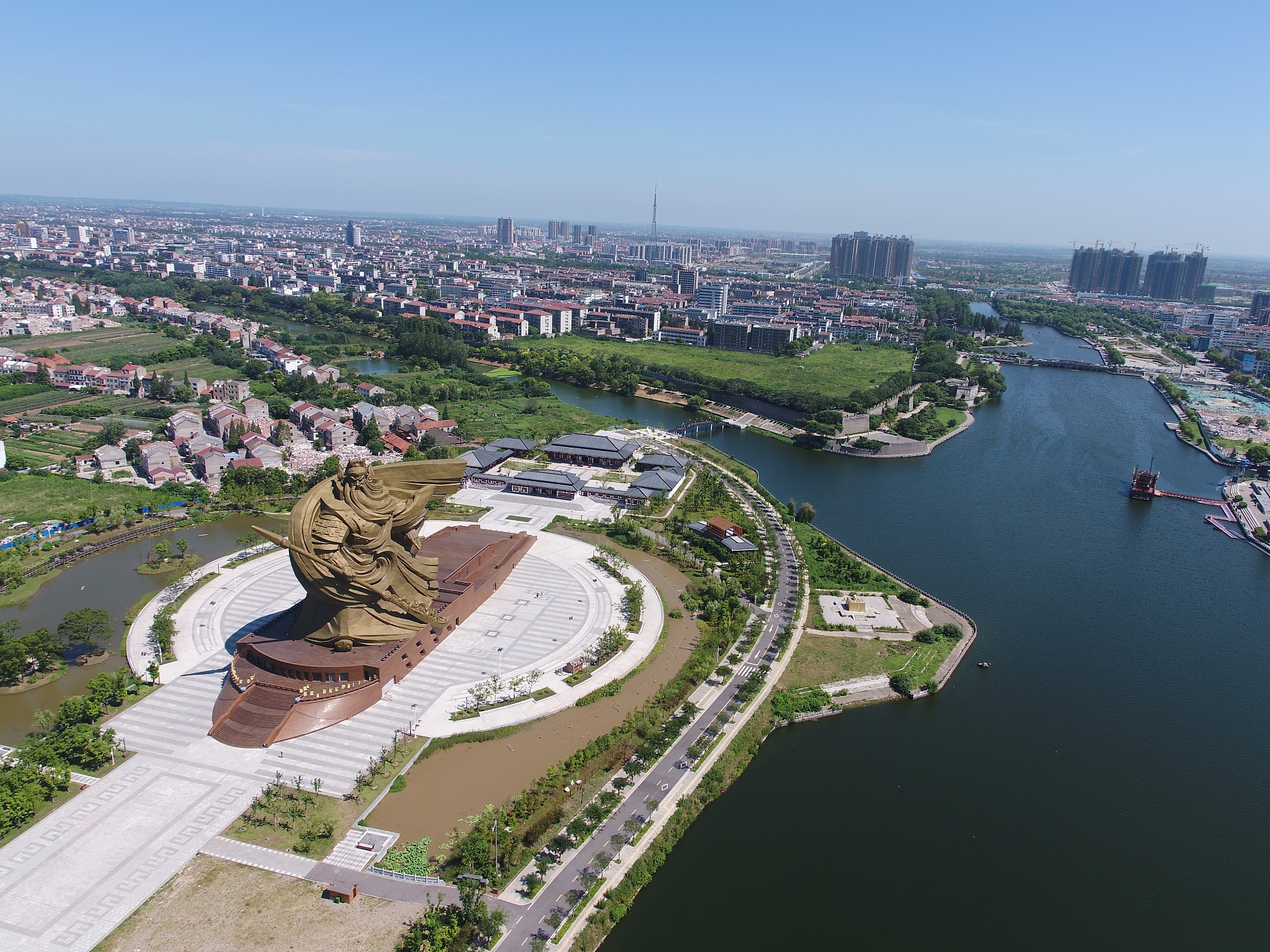 When the park just opened, tourists need to watch the Guan Gong statue closely, and it takes 40 yuan to buy tickets. If you want to enter the Guangong Cultural Exhibition Center, you need to spend an additional 120 yuan to buy a ticket. However, since March 18, 2019, Guan Gongyi Garden is free of free to local citizens, and only tickets for foreign tourists will receive 40 yuan/piece ticket.

According to media reports, Jingzhou Guogongyi Garden started in February 2014, covering an area of ​​228 acres, and the project investment was 1.5 billion yuan. In 2015, the Guan Gong statue in the Guanyi Park was rated as the fifth batch of cultural industry bases in Hubei Province, and was included in the key project library of the Chinese cultural industry.

However, this Jingzhou landmark building, known as the “largest public statue in the world”, has a bad business after its completion.

In 2018, some tourists said on Zhihu: “The performance project of the icon base cannot be performed so far, and to the north of the Guan Gong Holy Element, I saw the door of the Guan Sheng Palace locked, and the original openness in the palace was open. I don’t know why the door is locked, rust is spots, and the weeds in front of the door are clustered! The promotional poster in front of the door has been dilapidated, and the hung red lanterns have faded. It actually became a ruins! After inquiry for a long time, I knew that the park has been so deserted, and there are no tourists. The Guan Sheng Palace often close the door!

Guan Gong, located on the banks of the moat, was a urban landmark

On May 30, 2020, a reporter from Times Weekly visited Jingzhou and saw Guan Gongyi Park, which is adjacent to the ancient city walls of Jingzhou, Hubei Hubei, Jingzhou Ancient City National Wetland Park, and other walls and vegetation than people. Can’t see the scene in the garden. The statue of Guan Gong, which is up in the garden, can only look at the height of the surrounding buildings, and it looks very eye -catching in the entire area. Within an hour of staying in the Time Weekly reporter, no tourists entered the righteous garden.

“Jingzhou people don’t go.” Xiao Wu, who had been studying in Jingzhou for 4 years, told the Times reporter that he had never been to the Guanyi Park during his college period because Jingzhou classmates said that there was no meaning to be there. “Even if he passed by passing by, he passed by passing by. I haven’t thought about shooting, except for big, I don’t feel much. “

Jingzhou native Kobayashi even told the Times Weekly reporter that he had never heard of the garden.

Development has not stopped

“Focus Interview” has previously disclosed that only 172.9 million yuan was cost to build a statue of Guan Gong. According to the introduction of the official website of the E -Travel Investment Group on the Jingyou Group, as of the end of 2018, the investment in the Guan Gongyi project in the Guan Gongyi Park was as high as 800 million yuan. However, as of 2020, Guan Gongyi, which had been opened for four years, was very bleak -the total income was less than 13 million yuan.

Although there are few tourists in Guan Gongyi, the commercial buildings nearby have not stopped.

Guan Gong no longer protects the moat of Jingzhou

The antique tourist street of “Jing Street” is located next to Guan Gongyi. The project officially started construction on March 18, 2019. It is understood that the total land area of ​​the Jingjie project is 20 hectares, the construction area is 120,000 square meters, and the project investment is 1 billion yuan. After completion, it will be connected to Guan Gongyi Garden to form a complete tourist route.

On August 28 this year, Xiong Jinyi, executive general manager of Hubei Jingli Commercial Management Co., Ltd., introduced that the construction of the project that lasted for more than a year, Jingjie (Phase I) has been basically completed, and it will enter the decoration stage immediately. Essence

Today, Guan Gong has been moved away. Can Jingjie decorated back to Jingzhou for him?