How can the cold wave come? Someone will definitely mention wearing autumn pants. Speaking of autumn pants, the recently known as the high -tech “cold artifact” self -heating underwear has become the hottest trend item. On the major e -commerce platforms, the prices of various spontaneous thermal underwear ranging from tens to hundreds of yuan, and the sales volume exceeds 10,000. The performance of “maximum temperature rise can reach 8 ° C” “30 minutes average heating rate 3.1 ° C” and other products. Is a piece of underwear so amazing?

Is it really warmer? Actual testing: The underwear fabric rising temperature is obvious

Consumer: My colleagues said that my self -heating autumn pants are very good and warm.

Consumer: There is no feeling of fever, which is not much different from ordinary cotton underwear.

Consumer: I think if the thickness is not enough or not warm enough. If you say that the hot, thin underwear can top a few pieces, I don’t think it can.

The reporter purchased two sets of hot -selling spontaneous thermal underwear from the Internet, and the price was around 100 yuan. The product details page indicated that the fabrics of the two underwear were “wet and heating fiber”. The reporter brought them to the National Textile Food Inspection Center, and the staff tested them in accordance with relevant national standards.

Reporter Lu Nian: Behind me is a instrument with hygroscopic heat and fever. According to national standards, we set the temperature at 20 ° C, the humidity is set at 90%, then puts the sample in such an environmental box, and then the sample is detected. What is the effect.

Before the test, the staff carried out the sample for more than four hours of drying and dampness treatment to ensure that the water was completely removed, and then they were put into a dryer.

Zhang Rui, an engineer of the National Textile Manufacturing Quality Supervision and Inspection Center: The dryer is a device that ensures that the sample is no longer absorbing moisture from the outside world. The particles under the dryer are color -changing silicone to ensure the dry environment inside the container. After we take out the dry sample from the oven, we will put it in a glass container and send it to the hygroscopic heating environment box through the glass container.

On the three metal sensors of the hygroscopic heating environment box, inserted the prepared samples, and the detection can be started. According to the relevant national standards, the test is performed under the condition that the temperature is 20 ° C and the humidity is 90%. The test results showed that the maximum temperature increases of the two spontaneous thermal underwear reached 9.5 ° C and 7.6 ° C, far exceeding the standard requirements of 4 ° C. Within 30 minutes, the average heating value is greater than or equal to 3 ° C. One of the two products is 3.8 ° C, which has just reached the standard, and the other is 2.8 ° C, which does not reach the standard.

As a result, spontaneous thermal underwear can indeed rise, but experts said that laboratory data and practical applications cannot be completely divided. 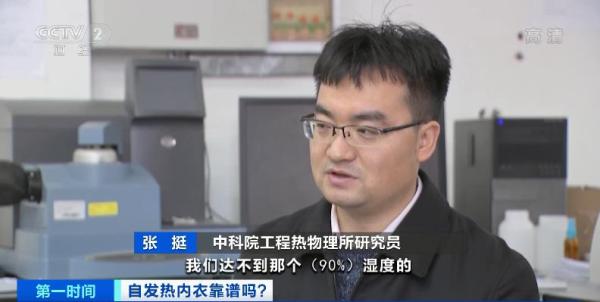 Zhang Ting, a researcher at the Institute of Engineering Hot Physics of the Chinese Academy of Sciences: The evaluation criteria for wet and hot fibers need to be further improved, because we have less than 90% of the humidity in actual life.

In addition to the detection standards to be improved, it can be seen from the experimental data chart that the two self -heating underwear for inspection is at the peak of the temperature in about 5 minutes at the beginning of the test, and then the temperature begins to decline. The temperature of the two products in 30 minutes has undergone changes from low to high and then low. Experts point out that this is because the measurement environmental humidity has been maintained at 90%. When the fiber of the spontaneous thermal underwear absorbs and saturate, it will stop hygroscopic heat and heat, and turn to absorb human heat and release humidity. In other words, the temperature of the spontaneous heating underwear rises quickly and falls quickly.

Wang Baojun, Director of the National Textile Products Quality Inspection Center: Four or five minutes of spontaneous thermal underwear or five or six minutes of water absorption and heat, and then quickly decrease the temperature. When it reaches 20 or thirty minutes, the fabric will basically not cause heat. Let’s say that its temperature increases 2 ℃, 3 ℃, or a few degrees Celsius, that is, for a while, and then restore the original state. I don’t think the self -heating underwear does not have the effect of insulation.

How to choose warm clothes?

So, in the face of the strongest cold wave since winter, how should we wear and resist the cold?

Wang Baojun, director of the National Textile Machinery Inspection Center: The same weight, such as 500 grams, some clothes may be 3 mm thick, and some may be 10 mm thick. 10 mm thick is warm than 3 mm, because it contains more air. The air plays an insulation layer in the clothing. So the same weight, the more fluffy, the warmer. In the same fluffy situation, the thicker the warm. This is the two basic principles. 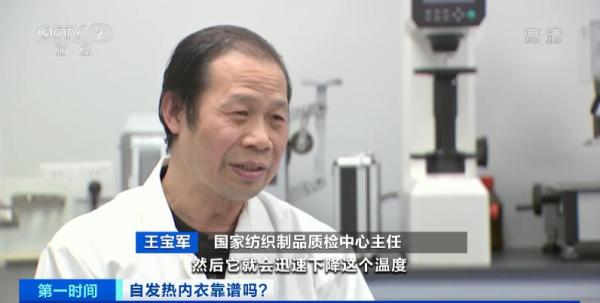