Define the structural components, and recognize the structural force and the deformation of nodes is the essence, so that it is not affected by the complicated “code”. As long as you figure out the stress characteristics of the component, no matter what it is called, you can understand the design intention, and you can build it according to the corresponding design structure.

The difference between “rigid connection” and “hinge” is whether the node components can “rotate” between each other. If it can be rotated, it is hinged, which mainly transmits shear power and axis. Force can also pass the bending moment.

The seismic framework reflects the principle of “strong connection-weak components”. To be straightforward: At the rigid connection, the bearing limit of the beam is lower than the rigidity of the node. It may only be damaged by the beam. It is impossible to occur if the beam is not destroyed and the node will not be stable. That is, we often call the “strong column and weak beam” rule. The “column” here is called “node” more appropriate.

Then, what is a frame beam is better to understand: the support of the support cannot be displaced (rotated), and the beam of the beam and shear power of the end node is the frame beam. 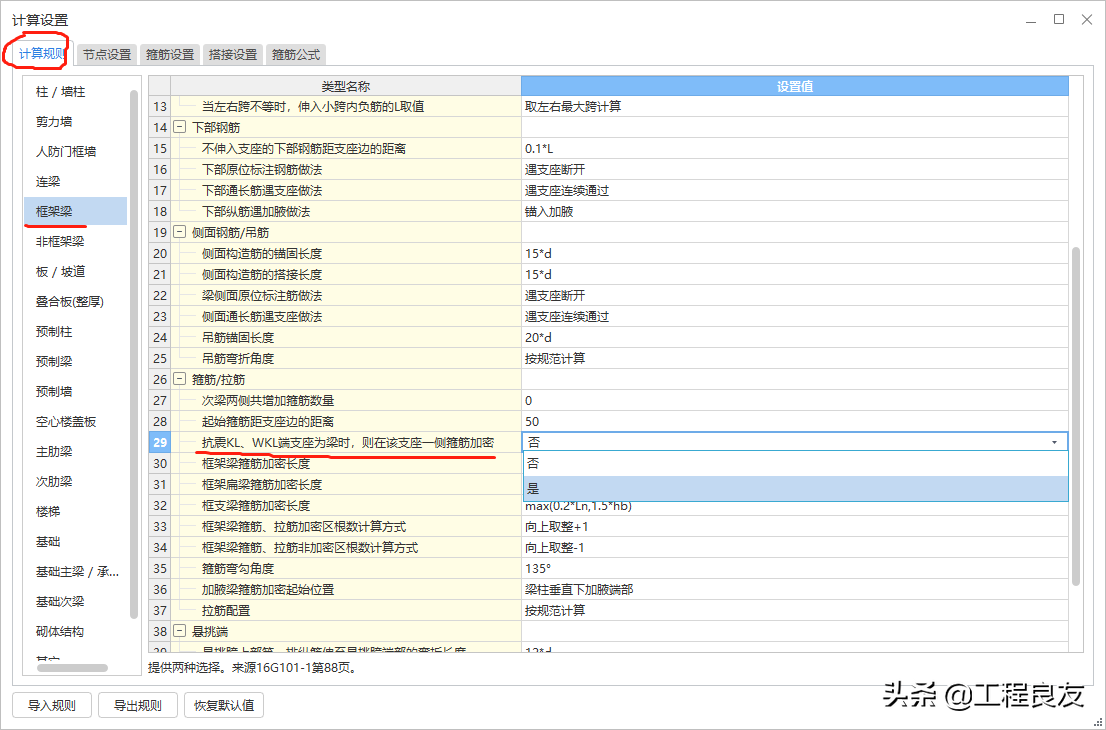 In the same way, the non -frame beam can also be defined: the node can be rotated, mainly to pass concentrated loads, and there is almost no bending moment at the node. Such a beam is a non -frame beam.

The frame beam can become a half -frame, for example: one end support is a frame column, and the one -side branch is a frame beam. Among them, at the end of the frame beam support, the support is the beam, the beam’s stiffness is small, and the concentrated load will move up and down (bending); the twist will also rotate. This node is not rigid, but hinged.

Non -frame beams can also become a half -frame. For example, one end support is a frame beam, and the branch of the other end is a frame column or shear wall dark column. It is also a hinge, a rigid connection.

KL2 (1) on one side is a dark column, and on one side of the branch is the box beam KL8, which cannot move while moving, so it is a half -frame beam.

In summary, as long as you can distinguish the stress and deformation of the node support, you can grasp the nature of the beam. After knowing what beam belongs to, you can take corresponding structural measures to guide the construction. Differential beams are not the goal. Choosing an adaptive structural measures to build it is practical.

Second, the structural measures of the half -frame beam:

The picture above is the design and structure of a half -frame beam. If you understand the definition and origin of the half -frame beam, this design intention is easy to understand. The focus is on the other points:

1. Why do you need to perform half -frame beam structure construction:

The structure of the frame beam is designed according to the requirements of earthquake resistance, rather than the frame beam without seismic structural measures. Therefore, a non -frame beam measure at the hinge can save steel bars.

The upper and lower longitudinal bands 15D will cause the internal reinforcement of the node to be dense. It can not ensure the net distance between the steel bars, but also cause difficulty in binding. It is also difficult to ensure the orientation of the longitudinal tendon hook, which has a adverse effect on the quality of construction. 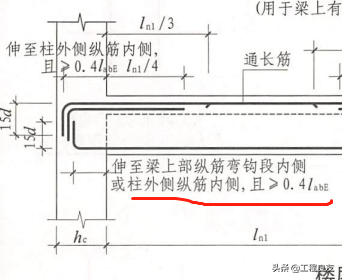 2. What are the main structures of the half -frame beam:

2.1 The structure of the lower longitudinal tendon at the branch:

Even if the anchor cannot be directly anchored, the length of the bending anchor is reduced by half. (From 15D to 7.5D). 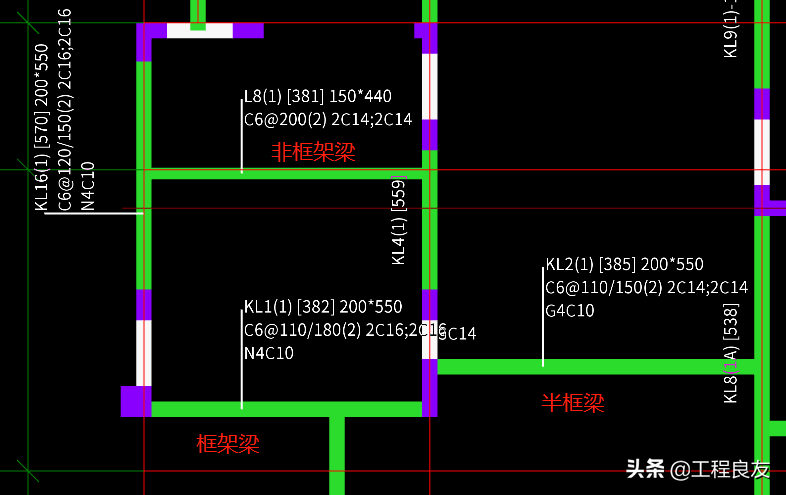 Because the frame beam belongs to the seismic component, under the earthquake force, the support can not move, and large shears are generated. The encrypted stirrup is mainly to bear the shear.

The non -frame beam does not belong to the earthquake -resistant component. Under the action of seismic force, the support of the branch nodes will vibrate up and down, left and right to remove the force. The internal force at the branch is extremely small. There is no need to encrypt the stirrup to bear the shear force generated by the earthquake. At the junction of the main and second beams, the additional stirrup on the main beam is to bear the concentrated load brought by the second beam, which is essentially different from the shear force produced by the earthquake.

In the figure above, the left side of the frame beam is encrypted, and the right side is actually the structure of the stirrup of the half -frame beam.

It can be seen that the construction measures of the half -frame beam are actually optimizing the design of steel bars. It can ensure that the quality of construction can also reduce the cost of engineering. It is a very practical measure.

Third, the place to pay attention to during construction:

For the “half -frame” structure, many construction personnel have not attracted attention. They usually do construction according to experience, and generally waste steel bars.

2. According to the design regulations, the number and quantity of the statistical half -beam, and the reinforced bars are prepared separately for feeding and processing to avoid chaotic materials and errors when the steel bars are tied.

4. Points to pay attention to in the management of engineering cost:

However, the default settings of Guanglianda Software have canceled the half -frame stirrup encryption. This is unreasonable, as shown below:

Guanglianda Software about the setting of half -frame stirrup

The calculation results set in this way are as shown below:

Half -frame stirrup encryption is set to “No” results

The results calculated according to the results set by Guanglianda do not meet the requirements of the design. The non -frame beam end should be encrypted, because the design concentrated labeling is encrypted area, and there is no instructions without encryption. 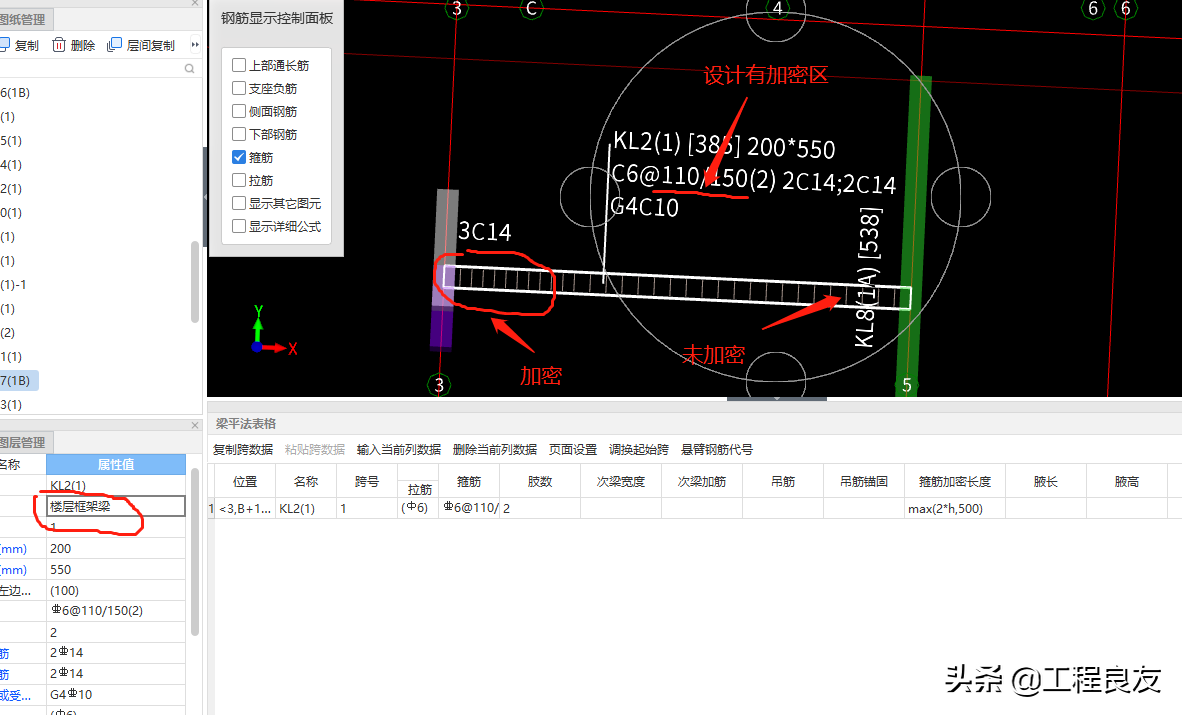 Whether the encryption should be based on the design rather than the construct of the atlas, and there are also explanations of the concentration of the map, “No encryption, the specific specifications and quantities of the stirrup are determined by the design.” It is recommended to set it in the software settings to “Yes”, otherwise it is easy to miss.

2. When modeling, the attributes of the modified beam can cope with the structural calculation of the half -frame beam:

Result data calculated according to the frame beam settings

Calculating results based on the frame beam 3D

For the anchoring of the half -frame beam longitudinal tendon at the end support, the amount of reinforcement can be calculated by changing the component attribute. However, because there is only one end node in most cases, the non -frame beam structure is required, and the average value is required on the basis of modeling computing to correct data.

1. Half -beams are part of the supporting nodes, and some supports are beams of hinge nodes. The nodes at the rigid node will not move, but the beams may be destroyed; at the hinge node, the node can be moved, and the internal force and support force are very small.

2. Judging the attributes of the beam through the support analysis and plastic deformation ability of the beam are the most reliable way.

3. Pay attention to the design instructions and structure requirements of the half -beam during construction. It cannot be constructed according to experience, otherwise it is easy to cause economic loss and quality defects. The reinforced bars are used more, and the settlement will be less.

4. When the steel bars are calculated, the relevant unreasonable setting of the half -frame in the calculation settings needs to be changed. Otherwise, the encryption of the stirrup may occur and the calculation results may not be encrypted.

5. It can be calculated by changing the component attribute to calculate the steel bars of the half -frame beam on the end branch, or it can also be manually calculated.

6. During the settlement, pay attention to the reduction of the amount of steel bars caused by the structure of the half -frame beam, otherwise there may be more calculations.